A Benefit for Spondylitis Association of America
by: Helgi OIafson

Helgi Olafson, 2018 Triple Crown of 200s finisher is looking forward to pushing his limits once again in what will certainly be a battle to keep one foot in front of the other to complete such a daunting attempt. Helgi aims to not only run the Triple Crown of 200s in 2021, but also to run between the three races to connect them all by foot within the 61-day span from the beginning of Bigfoot 200 until he finishes for the fourth time at Moab 240.

This is a fundraiser for the Spondylitis Association of America (SAA), a 501c3 Nonprofit Organization. SAA Mission: To be a leader in the quest to cure ankylosing spondylitis and related diseases, and to empower those affected to live their lives to the fullest.

SAA hopes this project brings together not only those who have ankylosing spondylitis and arthritis, but also anyone with the interest in living healthy and active lifestyles, where mindful exercise is at the forefront. The community will grow stronger as the project unfolds and SAA can't wait to cheer Helgi on at the finish line of this 68 day journey, where in order to finish, he will have to trek an average of 47 miles per day with an average of 6,000 feet of climbing per day, though some of the days will be much longer distances, in order to build in "zero" days and to add in a few FKT (fastest known time) attempts along the way (Pacific Crest Trail through Oregon: 442 miles)(American Discovery Trail through Nevada: 516 miles)

Helgi Olafson has been working with the Spondylitis Association of America since his start into endurance sports at the age of 28 in 2011, raising awareness through social media, newspaper articles, speaking engagements, and community outreach surrounding his racing career to promote exercise as medicine for people suffering from ankylosing spondylitis and arthritis.

This project will have a few objectives. Raising $28,555, or $10 per mile is the first objective. The second objective is to create a growing social following as the project unfolds. Helgi will dedicate some of his time each day on and off of the trail to talk about ankylosing spondylitis with the objective of getting not only running and arthritis communities involved, but also friends and family in sharing this epic event as it unfolds. He will share the stories of other in the world who are doing great things regarding Ankylosing Spondylitis. People will tune in just to be a part of the struggles and wins of each day. The third objective is to create a true story in print and as a documentary that will focus on the will to succeed despite the ever-changing and ever-challenging atmosphere associated with traversing deep forest, mountain and high dessert, where there are no invariables. The film will not only portray Helgi's runventure from start to finish, but also will focus on the teamwork and camaraderie that could very well make or break this supported attempt. The film will also be a vehicle to promote sponsors.

Businesses that align with the values portrayed by this project are encouraged to become sponsors. The potential reach that this project represents is extensive.

We are accepting donations in the form of product, goods, or monies. Each sponsorship agreement should not only benefit the success of this project, but also to offer return on investment for the sponsors involved.

Please click on the link above to watch the promotional video to get a better idea of the scope of The Trans Triple Crown of 200s. Please then take a few minutes to look through the links at the bottom of the page learn more about Helgi and his past outreach projects.

Thank you very much for your time. We are looking forward to the adventure. 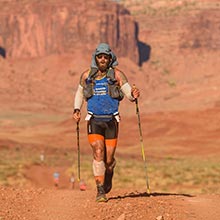 Thanks for visiting my ExoVend Shop featuring LEKI Trail Running Poles. I'm proud to support Spondylitis Association of America and, as part of my project to support SAA I will donate all my earnings from your purchases to the organization. For more information about my project please click the logo below.

Free Shipping
on all orders!

Note: Due to Sales Tax rules
LEKI does not ship to
Alabama or Louisiana